The myth of Siena 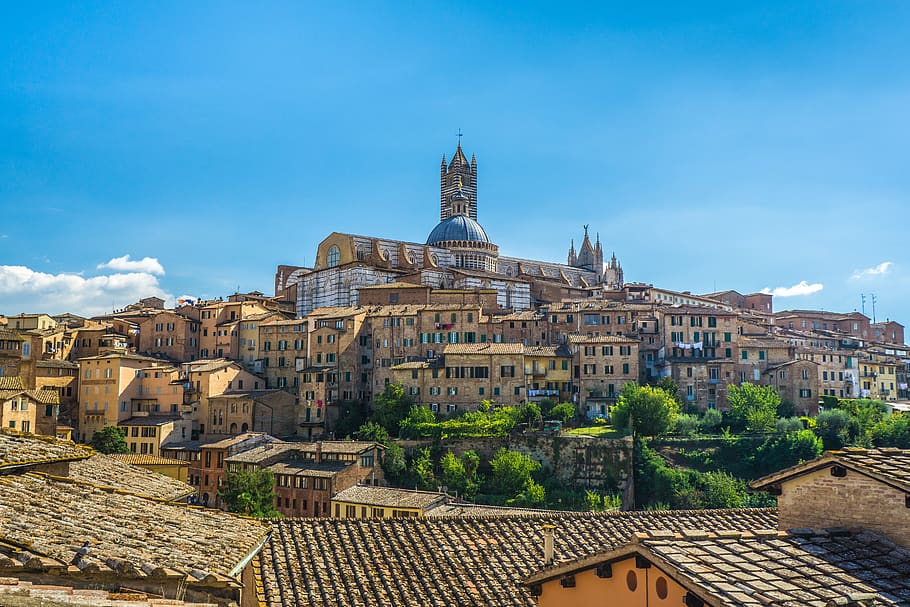 The myth of Siena

The creation of the myth of Siena and the Palio

The common image we have of Siena is that of a precious Gothic casket, coherent and organic, characterized by the typical brick facades, ogival arches and paintings with a gold background. The creation of this romantic image of the city is the result of the nineteenth-century culture that arrived in Italy from Germany and England, accompanied by the revaluation of medieval architecture and art, which developed much earlier and more widely in Siena than other parts of Italy, beginning in the mid-nineteenth century.

The development of this purist current and the concrete need to convert pre-existing buildings to new functions, have meant that in this city architectural structures, especially those of the 14th century, were much more modified than in other historical Italian cities. This development in architecture and painting runs parallel to that of a craftsman in the highest quality style, which contributes to producing a true Gothis Revival culture. This idea of restoration and design in style was very early in Siena and was also present long before the nineteenth century, as demonstrated for example by the raising of the two side wings of the Palazzo Pubblico in 1680, but it was precisely during the nineteenth and early twentieth centuries that the phenomenon was accentuated, transforming the urban landscape forever and giving it its present appearance. Think for example of the creation from scratch of Piazza Salimbeni and the replacement of the Fonte Gaia. These great works, alongside the authentic testimonies of history, have given the city a mythical, almost dreamlike face, which is nevertheless alive and present with all its charm, not only in form, but also in the spirit of the city and its inhabitants.

The Sienese population in fact incessantly cultivates its traditions and is characterized by a very strong sense of belonging to the city; it is divided into seventeen Contrade (Aquila, Bruco, Chiocciola, Civetta, Drago, Giraffa, Istrice, Leocorno, Lupa, Nicchio, Oca, Onda, Pantera, Selva, Tartuca, Torre, Valdimontone), divided territorially and equipped within them with administrative bodies and religious seats. Throughout the year, the Contrade organize events and manifestations, which culminate in the famous Palio race, which takes place twice a year, on July 2 (Palio dell’Assunta) and August 2 (Palio di Provenzano), the only period costume festival still lived and felt authentically. Of medieval origins but institutionalized in its present form between the 17th and 18th centuries, the Palio, with its complex ceremonial, historical procession, victory celebrations, triumphal parades and the unbridled horse race along the splendid perimeter of the Campo, is the culmination of the life of the Contrade, which organize it throughout the year, and represents better than any other symbol the extraordinary peculiarity that Siena and its inhabitants still preserve.